The Altera Cyclone V SoC has an FPGA and a Hard Processor System (HPS) woven into a single processor package.  The HPS is a dual core ARM Cortex A9.  Building everything from scratch is the best way to figure out how the system works.

The boot sequence on a Cyclone V HPS works like this:

There are two well thought out options for the preloader according to the Cyclone V boot guide.  The two options are licensed differently depending on how the source code is built. One is licensed under a BSD license and the other under GPL v2 with U-Boot.

Building a pre-loader image for the DE0-Nano-SoC board was straightforward.  Altera provides the bsp-editor utility for customizing the preloader configuration and generating the BSP HPS preloader source code, after which, make is used to build the sources using the Mentor ARM cross toolchain.
The preloader settings directory can be found on the DE0-Nano-SoC CD in the DE0_NANO_SOC_GHRD subdirectory. 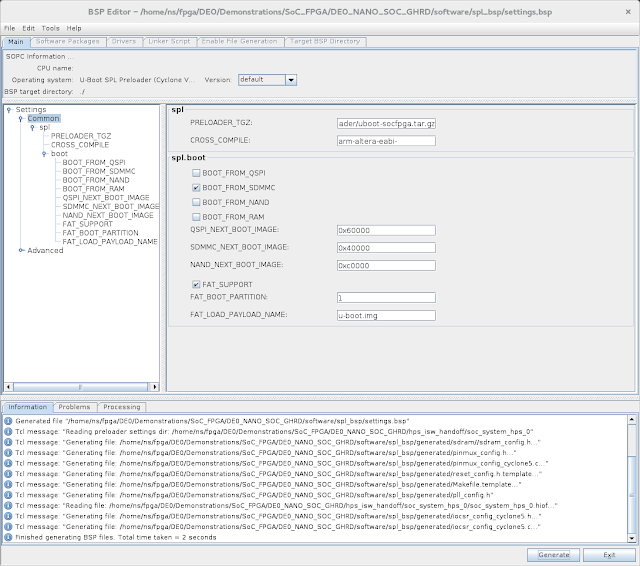 The preloader load address can be set via the bsp-editor so that the on chip ROM either loads the preloader from an absolute zero address on the sdcard or from a fat partition with id equal to a2 on the sdcard.  These are the options for booting from the sdcard. 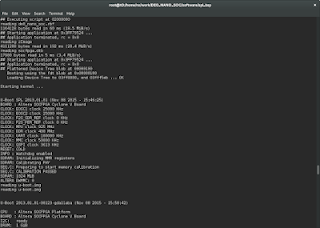 There's quite a bit that can be done with the Cyclone V FPGA SoC boot configuration.  FPGA images can be loaded from U-boot.  The jumpers on the board can be configured to boot from the on-board serial flash (QSPI), bare metal applications can be loaded from the preloader, the FPGA can be configured from serial flash, and the list goes on.  The HPS SoC Boot Guide for the Cyclone V SoC  is a valuable reference and contains all of the boot configuration information.
By Bryan Hinton at November 08, 2015 No comments:
Email ThisBlogThis!Share to TwitterShare to FacebookShare to Pinterest 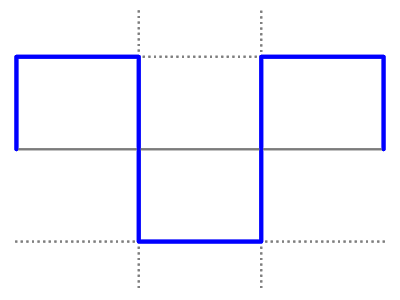 1.  Write the GNU/Linux BSP image to an SD card

At this point, the build should be complete, without errors.  The output should be as follows.

Insert an SD card into an SD card reader, connect it to the host, and execute the following commands on the host.

2. Set the physical switches on the RioTboard to boot from the uSD or SD card.

3. Connect the target to the necessary peripherals for boot.

There are two options


A sound should be played through the speakers.


Talk into the microphone for ten seconds.


A recording should play through the speakers.


An ICMP reply should be received.
By Bryan Hinton at July 16, 2015 No comments:
Email ThisBlogThis!Share to TwitterShare to FacebookShare to Pinterest

In the second part of this guide, the source code will be pulled, the build configuration will be customized, and the build will be executed.  Part II of this guide consists of the following sections.

3. Create a new layer for the custom Linux distribution

4. Customize the image in the meta-bsec layer.

Execute the following commands on the host.
Customize bsec-image.bb as follows.  Lines with bold text indicate lines to add to the file.

Create sources/meta-bsec/conf/layer.conf with the below contents.

6. Create the distribution configuration file in the meta-bsec layer.

Create sources/meta-bsec/conf/disro/bsecdist.conf with the below contents.

7. Add the new layer to bblayers.conf

While the image is building, please take note of the following.

Continue to Part III
By Bryan Hinton at July 15, 2015 No comments:
Email ThisBlogThis!Share to TwitterShare to FacebookShare to Pinterest

Creating a custom Linux BSP for an ARM Cortex-A9 SBC with Yocto 1.8 - Part I

This guide is an update to "Creating a custom Linux distribution for an ARM® Cortex®-A9 based SBC" and provides directions for building a GNU/Linux BSP for the RioTboard (Internet of Things) with Yocto 1.8 on a 64-bit Fedora 21 GNU/Linux host.  The latest stable version of Yocto 1.8 has been incorporated along with build instructions for version 4.0.7 of the GNU/Linux kernel with i.MX 6 patches, U-boot, audio recording and playback support, and a full kernel and application development environment on the target.

This guide is split into three parts as follows.

I. Creating a custom Linux BSP for the RioTboard (Internet of Things) with Yocto 1.8- Part I

II. Creating a custom Linux BSP for the RioTboard with Yocto 1.8 - Part II

III. Creating a custom Linux BSP for the RioTboard with Yocto 1.8 - Part III

The BSP will consist of a GNU/Linux 4.0.7 kernel, an EXT3 root filesystem, and the U-Boot bootloader.  All components will be compiled from the latest, public sources.  The GNU/Linux system will include support for audio recording and playback via the RioTboard's MIC In and Audio Out jacks. Support will be built for ethernet, ipv4, bluetooth, USB host and USB gadget, and an ssh server.  The final target image will also contain native ARM compilers, a full SDK, strace, GDB, package management tools, and the GNU/Linux 4.0.7 kernel source code with i.MX 6 patches already applied.

Finally, Yocto will be configured so that all source packages are archived in their original format with accompanying license files.

To start with, please read Setting up an ARM® Cortex®-A9 based SBC which outlines the necessary components to get started.  A microphone and a set of powered speakers will be needed, both with 3.5mm connectors.  An Audio-Technica ATR4650 microphone and a pair of Logitech S-00134 powered speakers will be onnected to the RioTboard.  These will be needed for testing audio recording and playback.


The Yocto build requires a large amount of space so it is recommend keeping a scratch area in the /home partition of at least 100 GB.

In Part II, the  source code for the kernel, boot loader, and root file system packages will be pulled.  All components will then be built from source and the GNU/Linux BSP image will be created for the target.