The DE1-SoC from Terasic is a great board for hardware design and prototyping. The following VHDL process is from a hardware design that I created for the Terasic DE1-SoC FPGA. The ten switches and four buttons on the FPGA are used as an n-bit counter with an adjustable multiplier to increase the output frequency of one or more output pins at a 50% duty cycle.

XOR logic gates are a fundamental component in cryptography. Many of the common stream and block ciphers use XOR gates. A few of these ciphers are ChaCha (stream cipher), AES (block cipher), and RSA (block cipher).
While many of the compiled and interpreted languages support bitwise operations such as XOR, the software implementation of both block and stream ciphers is computationally inefficient compared to FPGA and ASIC implementations.
Hybrid FPGA boards integrate FPGAs with multicore ARM and Intel application processors over high speed buses.  The ARM and Intel processors are general purpose processors. On a hybrid board, the ARM or Intel processor is termed the hard processor system or HPS. Writing to the FPGA from the HPS is typically performed via C from an embedded Linux build (yocto or buildroot) running on the ARM or Intel core.  For a hybrid ARM configuration, a simple bitstream can also be loaded into the FPGA fabric without using any ARM design blocks or functionality in the ARM core.

The following is a simple hardware design that I wrote in VHDL and simulated in ModelSim. The image contains the waveform output of a simulation in ModelSim. The HPS is not used. The bitstream is loaded into the FPGA fabric on boot. VHDL components are utilized and a testbench is defined for testing the design.  The entity and architecture VHDL design units are below.

The Raspberry Pi 3 is powered by the ARM® Cortex®-A53 processor.  This 1.2GHz 64-bit quad-core processor fully supports the ARMv8-A architecture. For this project, a custom Linux distribution was created for the Raspberry Pi 3.

The Sony 14 megapixel image sensor with the infrared filter removed can be connected to the Raspberry Pi 3's MIPI camera serial interface.  Image capture and recognition can then be performed over contiguous periods of time, and time-lapsed video can be created from the images.  With support for Tensorflow and OpenCV, object recognition within images can be performed.

For the initial run, an infrared Time-lapse Video was created from an initial image capture run of  one 3280x2460 infrared jpeg image captured every 15 seconds for three hours.  40, 5mm, 940nm LEDs, powered by 500ma over 12v DC provided infrared illumination in the 940nm wavelength.

Tensorflow was running in the background (on v4l2 kmod) and providing continuous object recognition and scoring within each image via a sample model.  Finally, OpenCV was also installed in the root file system.

The time-lapse infrared video was captured of my living room using the above setup and custom Linux distribution.  Below this image are images of Tensorflow running in a terminal in the background on the Raspberry Pi 3 and recognizing/scoring objects in my living room. 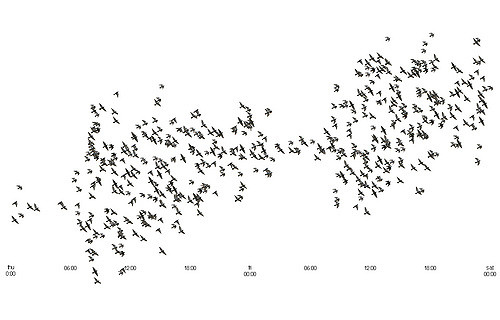 On a preemptive, timed sliced UNIX or Linux operating system (Solaris, AIX, Linux, BSD, OS X), program code from one process executes on the processor for a time slice or quantum, after which, program code from another process executes for a time quantum. The first process relinquishes the processor either voluntarily or involuntarily so that another process can execute its program code. This is known as context switching. Context switching facilitates interleaved execution. When a process context switch occurs, the state of a process is saved to its process control block and another process resumes execution on the processor. A UNIX process is heavyweight because it has its own virtual memory space, file descriptors, register state, scheduling information, memory management information, etc. When a process context switch occurs, this information must be saved, and this is a computationally expensive operation.

In summary, both threads and processes are scheduled for execution on a processor core. Thread context switching is lighter in weight than process context switching. Both threads and processes are schedulable entities and concurrency is defined as the interleaved execution over time of schedulable entities across one or more processor cores.

The Linux user space APIs for process and thread management abstract a lot of the details but you can set the level of concurrency and directly influence the time quantum so that system throughput is affected by shorter and longer durations of schedulable entity execution time.

Conversely, parallelism on a time sliced, preemptive operating system refers to the simultaneous execution of multiple schedulable entities over a time quantum. Both processes and threads can execute in parallel across multiple cores or multiple processors. On a multi-user system with preemptive time slicing and multiple processor cores, both concurrency and parallelism are often at play. Affinity scheduling refers to the scheduling of both processes and threads across multiple cores so that their concurrent and parallel execution is close to optimal.

Software applications are often designed to solve computationally complex problems. If the algorithm to solve a computationally complex problem can be parallelized, then multiple threads or processes can all run at the same time across multiple cores. Each process or thread executes by itself and does not contend for resources with other threads or processes that are working on the other parts of the problem to be solved. When each thread or process reaches the point where it can no longer contribute any more work to the solution of the problem, it waits at the barrier, if a barrier has been implemented in software. When all threads or processes reach the barrier, the output of their work is synchronized, and often aggregated by the primary process. Complex test frameworks often implement the barrier synchronization problem when certain types of tests can be run in parallel.

Last, when designing multithreaded and multiprocess software programs, minimizing lock granularity increases concurrency, throughput, and execution efficiency. Multithreaded and multiprocess programs that do not properly utilize synchronization primitives often require countless hours of debugging. The use of semaphores, mutex locks, and other synchronization primitives should be minimized to the maximum extent possible in computer programs that share resources between multiple threads or processes. Proper program design allows for schedulable entities to run in parallel or concurrently with high throughput and minimum resource contention, and this is optimal for solving computationally complex problems on preemptive, time sliced, multi-user operating systems without requiring hard real time scheduling.

The following VHDL processes pulse the GPIO pins at different frequencies on the Altera DE1-SoC using multiple Phase-Locked Loops. Several diodes were connected to the GPIO banks and pulsed at a 50% duty cycle with 16mA across 3.3V. Each GPIO bank on the DE1-SoC has 36 pins. Pin 1 is pulsed at 20Hz from GPIO bank 0, and pins 0 and 1 are pulsed at 30Hz from GPIO bank 1. A direct mode PLL with locked output was configured using the Altera Quartus Prime MegaWizard. The PLL reference clock frequency is set to 50MHz, the output clock frequency is set to 50MHz, and the duty cycle is set to 50%. The pin mappings for GPIO banks 0 and 1 are documented on the DE1-SoC datasheet.